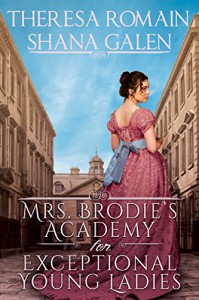 I'd describe this duo as one of those that give you an AWWWW! feeling and that feeling stays with you long after you put the book down. Both stories are about second chances.

The Way to A Gentleman's Heart by Theresa Romain stars Marianne, a lady of society-turned cook, and James, a man with plenty to regret but willing to make amends and hoping for forgiveness. I always find this author’s stories kind of hard to understand in the sense that I don’t connect with the characters right away. At first I thought James had hurt Marianne too much and grueling for the rest of his life wouldn’t be enough to deserve forgiveness, however once Marianne’s musing put their relationship in a different light and she realized he was a worthy man I too realized just as much.

Counterfeit Scandal by Shana Galen intertwines characters from No Earls Allowed, book 2 in her The Survivors series but you don’t need to read that book first in order to read this one. Bridget and Caleb were forced to part ways at a moment when Bridget needed him the most. Fast forward several years later and Caleb seems to be the only one to help her find what she once lost but loves the most. I liked this story a lot. The author was able to pack plenty of character development, emotions, action, and redemption in only a few pages. The fact that Caleb was willing to make the ultimate sacrifice for Bridget was kind of the cherry on top.

I think this set perfectly represents what each author is about so if anyone's thought about trying something by either one I encourage you to give these novellas a go.

I received this book at no cost to me and I volunteered to read it; this is my honest opinion and given without any influence by the author or publisher.